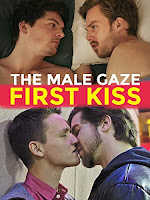 I just reviewed the second in the series of the Male gaze recently, so I went and looked for part one to watch and review it here. This collection of short stories brings together five shorts that are based around men experiencing romantic and/or sexual interaction with other men for the first time. From regret to introspection to fighting back and all-out laughter, a confection of emotions await.

Naked (Sweden)
Straight friends Erik and Anthony sleep together after a night of drinking. In the aftermath Erik continues his relationship with his unsuspecting girlfriend while Anthony starts to consider that he may not be the person he’d always thought he was. Its time to confront his true feelings and likings.

Walk With Me (USA)
While walking his dog, Eric bumps into the confident and carefree Ryan. Taking a nervous leap, Eric accepts Ryan’s invitation to walk through the city en route to a concert. In the next six blocks, the two men discover that intimacy through anonymity also exposes one another’s flaws and insecurities. Will they make it to the concert in one piece?

One Night Only (Australia)
A young confident man Tyler crashes a party with best friend Erika to check on a guy. BUt once dejected by him for putting on makeup, Tyler has to decide, how to get hold of his self esteem and  move on.

Tapette (France) [Mousetrap]
A builder Michel finds himself aroused by co-worker Thierry, which doesn’t go down very well with his long-suffering and totally unconvinced girlfriend, Charlotte. Nevertheless, Michel goes out into the night to a gay club to explore his new desire.

This set of shorts were actually pretty good and interesting and I had fun watching them. I would definitely recommend. (6/10)
Posted by Golu at 10:03 PM