Yet another high school coming-of-age stories. We have seen plenty of these by now and can guess in most cases on what’s going to happen, but occasionally we also do get something interesting to watch. The film was recommended by one of my followers here and Iw as really looking forward to it and wanted to like it quite bad but sadly, I think over expectations killed this movie to an extent for me.

Mike, is our main protagonist, a gawky and nerdy teenager in high school. He lives with his mother at home and works at a video store. He is constantly late to school and is bullied by school guys and is called faggot occasionally. A new hot and good looking student Will joins his class and a class project brings the two guys together to present their own interpretation of ‘Romeo & Juliet’. The duo decide to give a spin to the story with Frankenstein’s monster and the Wolfman as two societal misfits who want to be lovers.   The two boys slowly get very close and we also get an insight into their lives. Both come from broken homes. Will’s father is drunk and abusive and his mother is in a nursing home, barely conscious and doesn’t even recognize her own son. Given such situations, When Mike approaches Will with his love, he first pulls away but slowly comes back. The two are now together slowly struggling with acceptance amongst themselves. The duo doesn’t get enough love at home and these are the moments that they have each other. The family situation doesn’t improve any more and just like the project they were working on, their love story also has a tragic ending. Will ultimately takes his own life leaving Mike to accept the reality and never forget his first love.

This film has received excellent reviews and have taken people back to those innocent times when cellphones were not there and people used to watch videos (probably early 90s); but I still feel there was something that was missing with the film. I can’t pin point to what it was but I was just unable to connect with the characters. I think they acted really well, especially Will, as the confused kid with abusive father. But I felt their chemistry lacked passion and felt more like friends. Mike was quite awkward , portraying exactly what his character demanded. Thankfully there are no unnecessary explicit sex scenes just to titilate us. The story was quite interesting and the direction was good too. A little bit focus on editing and background music would have helped this film quite a bit. I did not understand any reasoning behind all the video store scenes which were a couple of them.

Either I was not in the right frame of mind or my expectations from a film are very different from a general movie-going audience but I was a bit disappointed with the overall result. (5/10)
Posted by Golu at 4:09 AM 6 comments:

Transitioning from a teenage to adulthood is never easy and we have seen quite a few films, mostly coming-of-age kinda stories that shows us what goes on in an individual’s mind. This film is a bit different, because our character is not only going through this phase and struggling through his sexuality; but also he has to deal with guilt, grief and identity. At this point, I do have to mention that the title of the film is neither inspiring nor flattering for the kind of story that this film brings to forte. The film is definitely not about teenage romp, instead it is a drama that leaves you thinking.

Mik lives with his elder brother and migrant parents. He is questioning his sexuality and finds himself madly in love with his best friend Dan, with whom he indulges in masturbation while watching lesbian porn. The duo have plans to escape their homes in search for better life. But sudden death of Mik’s brother Tomi (partly because he is running away from Mik who watched him naked and got aroused) in a car accident brings further havoc in Mik’s life. His parents are indifferent to him, his father never considers Mik worthy of his son, and we find the secret later. To add further to his problems, hi smother wails about how he’ll never be half the man his brother was. Dan, meanwhile finds a girlfriend and Mik finds himself further lonely. He son finds solace with Tomi’s heavily pregnant girlfriend. Mik is so confused about what he wants that he tries to slip in his brother’s shoes by trying to sleep with his brother’s girlfriend. Mik is tormented. He goes to stranger’s home, indulges in drugs and random sexual encounter with both a guy and a girl. Things further go south when he tries to convince Dan that his girlfriend doesn’t deserve him and kisses him. Shocked, surprised and outraged; Dan ends up raping Mik only to later repent on what happened. Mik still doesn’t understand why everything bad happens only to him. Some family secrets are revealed and finally Mik realizes that he needs to stay back and take care of his parents and stay back and he will have to look for love and care with someone else outside Dan.

One thing that the film clearly shows is the uncertainties that Mik’s like keeps bringing him. Truly everything seems to go wrong for the kid. The guy playing the character of Mik does an incredible job as a frightened and confused teenager who feels responsible for his parents unhappiness, for his sibling’s death and scared of losing his best friend to a girl. His struggle with his identity is very real. On the other hand his best friend Dan tries to be there for him every step of the way until he gets to know that Mik is in love with him. The parents reaction was a bit something that I didn’t understand. Surely it wasn’t Mik’s fault for who his father was but both his parents treat him very bad for no reason. He is given no love and is even made responsible for his brother’s death. The film was intense because you just did not know what else is gonna go wrong for the boy and you just want to be there for him. The film doesn’t hold back on the struggles that come with such a sexual awakening.

An interestingly unique and different film though quite heavy. You need to be in the right set of mind to understand and really appreciate this film. (7/10)
Posted by Golu at 10:06 AM 2 comments:

When We Rise (Mini-Series) 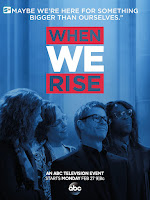 This is a 4 part mini series that aired on ABC channel, which is a dramatization of the real life San Francisco centered fight for LGBT rights from 1972 to 2015. The LGBT community which arguably has had the most numerous organized campaigns against them of any minority group to suppress those rights in the United States during that time period; is shown with some real life snippets thrown in for people to relate to it better. In totality it is a long watch but absolutely essential for us to appreciate the fights that our seniors have fought for us to get us the rights that we have today and live relatively stress and hassle free.

The series focuses on the advocacy and other supportive work of three primary individuals, Cleve Jones, Roma Guy and Ken Jones, whose experiences focus on different aspects of the issue. At the center we have Cleve Jones, a gay teenager barely surviving on the streets of San Francisco, who eventually goes on to become one of the most prominent figures of the gay rights movement. He forms alliance with Roma Guy, a feminist activist who discovers her own sexuality in the process of agitating for the rights of her friends who are lesbians. Ken Jones is a black Vietnam veteran whose story is a bit alienated from the movement itself but it does focus on loss, addiction, and spiritual crisis. The intersections of sexuality, race, gender identity, and economics is all handled beautifully in this section of the series. We also have Diane, who is Roma’s partner and he own struggles to bring up a family and still be neutral without jeopardizing her career. The initial 2 parts show how hostile the entire the entire SF institutions were towards the gay community and how we did not have support from any section of the society. But just in the time when we the movements start and the heat starts taking place, slowly men start to get sick and suddenly the country in engulfed in AIDS crisis. Ken, who had won a hard-earned enclave of peace, ends up bereaved, homeless, and an addict. Ken and Roma need to move from political activism to fighting for their and friends’ life. Right from the days of Harvey Milk upto the very recent DOMA and Prop 8; we get to witness everything through the lens of these primary characters.

As I have mentioned above, There is a lot of stuff that has been tried to show and cover in this four part series, and in the process I felt a lot of it left more to be desired. Some fights felt left unfinished, especially in todays time when we could be so close to losing it all that we have achieved in past 50-ish years. The reality is that everything we see in this s real and actual people helped us achieve our goal while many of us just sat and did nothing but are enjoying the benefits. We really need to appreciate and feel gratitude for what we have today given to us pretty much without having to fight for it. The series may not have been the best rendered because 5-6 hours is not enough time to show everything that needs to be covered but is still super important.The acting by all actors is simply amazing. I personally felt the younger teenage actors were more in sync with the character than the adult versions. Also the connection between the actors within the same character felt missing but I guess. who cares! Guy playing Cleve Jones younger version is the best of the lot. I personally learnt a lot about the feminist movement as well in SF. This was a very good reminder for us and our history and now I am curious to read and see more about what happened in other parts of the country especially NY and the world.

We did have a long journey behind us whose rewards we are reaping but will this continue to be the case. I felt asking this question without any convincing answers. (7/10)
Posted by Golu at 1:39 AM 2 comments: