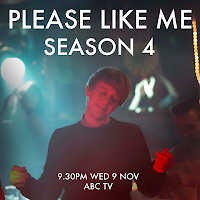 Yay!! Season 4 of one of my favourite shows. You have no idea how I have controlled myself not to watch the episodes the day that they were telecast, since I am such a fan. But the fun of binge watching all the six episodes was too much and so I waited till all episodes were aired and first thing I did was watch the whole season All my memories from previous seasons came coming back and I am glad that they did a quick preview of sorts from previous seasons to refresh your memory. That was definitely a good touch. Sadly this season had only 6 episodes.

Josh & Arnold are still together but clearly something is missing. They try threesome but the third doesn’t like Josh as much. A small divide occurs between them and on a trip to celebrate Hannah’s birthday Josh decides to breakup with Arnold. Meanwhile Tom and his girlfriend seem to begetting along well with each other and being very very supportive of Josh. The girlfriend clearly enjoys Josh’s company a lot more, since he is fun. Josh spends time with his father and mom on a lavish dinner where they talk about wonderful things about past, present and future (one of my favourite episodes). Heartbroken Arnold tries to move on and so does Josh and we see him with various different possible dates. Surprisingly Geoffrey, from previous seasons return for some fun times with Josh. It seems Josh is finally growing up. Tom decides to move out of the home with his girlfriend (part of becoming an adult) but things al change when Josh’s mom commits suicide. Suddenly Josh’s life goes topsy turvy, but with support of everyone he is able to get through all this. Both Joh and Tom move out of their home. Josh buys a new place after selling his mother’s home and Tom moves out as well. But in their new space he and his girlfriend realise that they need to breakup since she doesn’t like this new change. The series ends with two best friends together enjoying each other’s silent company with some yummy food.

One big shift I felt this season was that all characters were a bit mature. Its been a while and they are starting to grow up and become mature. Sure, none of them has any job and you don’t know what they do but at least in all other areas they try to act and be mature. All the goodness in terms of humour, great natural acting, goofiness and reality; all at the same time. It was a perfect recipe for e after a long long tiring day at work. As in previous season, a lot of focus is on food and presentation and I love that and in fact one of the episodes this season is all in a restaurant eating a 15 course meal which looked mouth watering. One of my favourite scenes this season was when Josh is taking his childhood toys back home and sings an entire song while making a teddy bear dance in bus. Hannah’s birthday episode and Josh-Arnold breakup was emotional. I wish everyone had a friendship like Josh-Tom. The way Tom supports Josh after his mother's death was awesome.

I can’t stress enough on how good this show is. This needs to be seen by each and every single individual because this is how a show should be: Fun, cocky, hilarious, slice of life and very very entertaining that always keep a smile on your face. (8.5/10)
Posted by Golu at 2:54 PM 4 comments:

The story is straight forward. A young man travels from Ohio to Seattle for an interview. In the hotel, he meets a male prostitute, a young mysterious man, who talk about stuff, have sex and the guy leave sin the morning. Thats it!! Yes, trust me; Thats it!! This 70 min long film could easily be made into a 4 minute short film. How long can one watch the protagonist looking outside his window, or doing stuff on mobile or laptop, or just waiting for the elevator. The talking portions in the movie were barely 15-20 minutes. The rest is long yawning shots of random things. I feel that the makers in their mind thought that they are making a tribute to ‘Weekend’ or something (at least I get that feeling). The direction was sooooo bad. I am sure the film was made using iphone or something as an experimental home video, but no one should have any expectations at all form this film.

What a terrible waste of time for everyone. Do not even attempt to see. Usually in such films the saving grace is a hot sex scene but that also here is sooo boring and nothing to talk about or watch. (0/10)
Posted by Golu at 2:34 AM 2 comments: