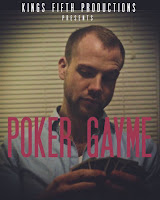 Poker Gayme (USA)
On a regular poker night, one of the friends in accidentally outed and is hurt when no one acts surprised and gives him a hard time. Cute n funny.

Tenho Local (Brazil) [Get A Room]
Daniel makes a date for casual sex with a stranger at his place. He lives moments of adrenaline in this strange crazy night. This is what role-play is about because the stranger happens to be the boyfriend.

Bloom (USA)
A dismal used car lot is owned by a very angry man. His vicious dogs guard the inventory at night, when only two other people work: Doug, the security guard and Rose, the bookkeeper. Rose likes Doug but he is going through a rough patch with his boyfriend, who in turn decides to surprise him; only to be attacked by vicious dogs.

A Song for Your Mixtape (USA)
An exploration about love and loss where the guy has lot his love first to a girl and then to life but he is still celebrating his birthday to keep his love alive.

For The Love Of God (UK)
An animation film that shows love for God by both mother and son but in a very different ways. Will Graham consummate his unholy fantasy and can it live up to his expectations?

Faut Pas Penser (France) [Must Not Think]
It's not simple when two boys at 17 find out they like each other.

Zack & Luc (US)
A split-screen film telling two versions of the entire story of a relationship. Each memory becomes intertwined with all the others: the firsts, the lasts, the middles, each of the small nothing moments that add up to something in the end. Confusing !

Intervalle (France)
Two boys who share a room wake up, but see each other differently than before. They are confronted with the impossibility of total unity.

Cuarto de hotel (Mexico) [Hotel Room]
Pablo finally decides to pick up Diana, a trans prostitute he has been watching for a few days. He takes her to a hotel room with very different intentions than her other clients but Diana is smart and soon figures out what exactly Pablo wants to know from her. Pablo’s life is about to change. Interesting but sort of obvious where it was going.

Sí A Todo (Spain) [Yes To Everything]
An encounter between a deaf/mute and a regular guy and their mutual attraction.

Juillet électrique (France) [Electric July]
In the burning heat of July, Thomas and Victor, two 14 years old teenagers, are bored to death and want to escape. Victor decides to take Thomas to an abandoned bridge. He will have to confront his fears and desires.

Le Phallomètre (Czech) [Phallometer]
Czechs were using Phallometers till 2010 for refugees who were trying to enter the country on pretext of being gay.

12 Points (Austria)
Jonas's father is surprisingly enthusiastic about drag queen Conchita Wurst's victory at the Eurovision. So his 18-year-old son works up the courage to come out and introduce his boyfriend... but unexpectedly, his father's tolerance and open-mindedness comes to an end.

Bleus Cycles (France)
Things are different for Loup when he returns to a small country town. His childhood friend Yves is now with Camille, who works in a café across the street. When the two boys are to repaint the walls of a bike shop about to open, Camille feels she needs to watch them. I wish I had subtitles to watch this with. It was really interesting.

Marrow (Australia)
A daring, exciting and poignant film about desire and sexuality, where a physically disabled guy is shown stripping to challenge society’s perception of people with disabilities.

Fadeout: Chase The Clouds (USA)
Video about gay boys in a conversion therapy center. How they beat their odds and will they still come out victorious.
Posted by Golu at 8:21 AM No comments:

This film tries to explore the masculinity of modern Australian make. The subject is a bit dark, in terms of the amount of pain that these men are ready to inflict upon each other and exploit each other. The film is shown a lot in flash backs and things start to make sense only after a while, so be patient.

The film is about three guys: Len, Meat and Phil. Len is the champion of a NSW surf life saving club and finds his position threatened by the club’s new golden boy Phil. Phil is younger, more handsome and gay. Phil being gay is an issue for Len, which we later find out does not come from ignorance, but rather his own repressed gay desires caused by an abusive father and the relentless machismo of his social circle. On the night of celebration of Phil’s win Len manipulates Meat (who for some reason does everything that Len wants him to do) into stripping an almost unconscious Phil of his clothes, burying him in sand up to his neck, and forcing him to sit back and watch the tide come in and drown Phil. Fortunately Meat succumbs to his instincts and rescues Phil before the waves take his life. Len, however, purposely swims too far into the ocean, ultimately drowning himself.

As mentioned before, the story unfolds in bits and pieces. At some point you feel the bis are getting along well together while at the other instant, it seems they are not. There are a lot of scenes involving bar shopping and straight-ish male bonding. I am not really sure if actually Australian beach culture (especially life guards) are as homophobic as its shown in the film but none the less the film makes for a thrilling watch. The men are pretty good looking and can also act well. The one big down side of the film for me was the non-linear story telling approach , which takes a while to put pieces together. The three-way balance of this relationship is the film’s most interesting element. Len and Meat’s relationship for example seems to be the only one in the entire film born of an actual friendship and loyalty. I am not sure of the voyeuristic approach to a twisted act of sadism and humiliation was necessary but I guess this is what shows an example of human psyche.

The film could have been lot more powerful but at the end it just ends up being an average satisfying thrill movie experience. (5/10)
Posted by Golu at 5:33 AM No comments: