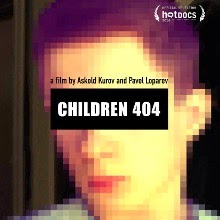 For any documentary to be successful, it is very important for it to hold viewers attention. Tell a story that has something important to say, incorporate key characters and their interactions and present in a way that viewers wanna know whats going to happen next. Sadly, this documentary miserable fails in the latter. It does have an important story to tell. But it is so long and drawn and boring that within 30 minutes into it and you have already completely lost the interest.

Based on the stories from the Children-404 social networking project, which offered Russian (and international) youth a channel to express themselves and seek or offer support, this documentary’s name wants to say that ‘visibility is vital’. In 2013, Russian President Vladimir Putin passed a bill forbidding the “promotion of nontraditional sexual relations to minors.” LGBT youth, now defenseless against insults and intimidation under this “gay propaganda” law, are considered sick, sinful and abnormal. The teens here detail their humiliations and discriminations, as well as their courageous stands against bullies. Although the documentary focuses only on 2 individuals mainly. A guy who wants to move to Canada and the girl who started the whole campaign. Not really sure what happened to all these other stories.

The documentary is brave and is an important story to tell that the world needs to hear but as I mentioned above, it fails to grab the attention. The one scene that was interesting for me was when the guy is standing with a banner in a square and the hateful comments he hears form the passers by and when the cops approach him. But otherwise there was a lot of drag. I guess lack of funds was probably one of the reasons to make it in a very home-made video style. In any case it is a very real and terrifying picture of contemporary Russia. (4/10)
Posted by Golu at 5:25 AM 3 comments:

Wow! Another Thai film that impressed me. Some people may find this controversial and even cheeky to an extent but I thought that the direction was done quite well and most of the stations were handled bravely and sensitively. Its not a typical gay teen coming-of-age film but its more than that. Its about whats right and what’s not in a relationship.

Golf lives with his father and aunt. His father showers him with money but not love. When he remarries, in comes Bank, his step brother. Bank constantly keeps trying to reach Golf but is always met with hostility. Things change when their common friends make Golf realise on how bad he is treating his brother. The 2 guys start accepting each other as brothers. Bank gives Golf the love and warmth that he has always desired. The school’s pop start is interested in Bank who refuses his proposal because he likes someone else. The moment when the 2 boys confess their love for each other being a brotherly love is very emotional. The two start a relationship and even find acceptance form their friend circle. But hell breaks lose when the parents find out. Golf’s father warns him to break off the relationship or else he will send Bank to US. Reluctantly Golf decides to go to US for studies so that Bank’s life is not torn apart. When he returns after 6 months with a fiancé, Bank is hurt and doesn’t know what to do. Clearly the 2 boys still care for each other and love each other very much. Hurt by what Golf has done, Bank decides to go to the school pop-star. Angry with this development and to prove his unconditional love for Bank, Golf puts himself and Bank in an accident. Golf survives but Bank is critical since he will now need kidney replantation surgery. Golf offers his kidney. Time passes and Bank misses Golf because he thinks he went back to US. Only in the end the truth is revealed that Golf dies after donating his kidney. He had  tumour which was diagnosed after the accident.

An interesting story done very interestingly. While t is a reflection of teenage guys love and discovery, the film doesn’t touch on any issues around homosexuality, which I am fine with. Not every film is supposed to do that. I liked how the friend are acceptable of their love even though maybe they may be not approve of 2 guys loving each other in general. The underlying theme of friendship beyond the love of 2 guys was quite evident. Both of the guy acted well IMO although Bank was much better than Golf, even prettier. Some of the scenes with Golf seemed way over the top but Bank was more natural and real. They should lose of the weird whining and grits that the 2 boys randomly give out. Its very comic and no dramatic at all. The first half of the movie was quite cute and sweet and send half was completely dramatic. I think the mares wanted every element to be part of this film. They rely didn’t have to put so much drama and twists in the second half of the film.  There is a line from the film that I would not forget
“Love isn’t about wing brave or not,
it’s about whether you want to love or not”

Very watchabale and overall the movie was still above my expectations. (7/10)
Posted by Golu at 5:54 AM No comments:

The idea on paper sounds very interesting. Get gay short films made by lesbian filmmakers and lesbian short films made by gays. How does the sex of the others work, how to deal with stereotypes, prejudice, sexual fantasies and pornography; all these areas could be explored.

So 15 queer crossovers filmmakers from Berlin were asked to make a short film about their idea of lesbian and gay love respectively.  All genres – animation, documentary, drama – were allowed. Filmmakers were also given a free hand in deciding which form their films would take – either experimental or conventional. The only parameters to which they were required to adhere were the length of each film – between three and seven minutes. It was interesting to see that even though we may think lesbians and gays co-exist, there is still a lot of cliches in the minds of many in the opposite group. Sometimes ridiculous and other times offensive. W are not just fucking differently, we are fucking different. And that’s just fine the way it is.

Of all films in this series, nothing actually caught my attention at all except one “Melancholy Road” and you can’t make a simpler film than this. A monologue about a teenage male’s first homosexual experience over a black screen. But the rest were ordinary, absurd and I felt cheated and wanted my time back so I can spent it on something more meaningful. (2/10)

My faith in good gay cinema has once again been reinstated. But I guess I knew that very well that I will encounter some wort of worse movies and some really decent to some really good ones. This film needs patience but that and the simplicity of this film is what makes it special and you feel connected to it. A small town life has to be portrayed in a way that it exists. Not more not less. So yeah, some of you may get very impatient but trust me, give this film your attention and no expectations. You would be surprised !

Like and Jonah have been inseparable ever since they were 4. Jonah is the smart one and an artist while Luke is just an average kid. It is their last summer together before Jonah leaves for college. Each one of them loves the other more than the other person thinks. It is killing both of them equally that Jonah is going to leave but is there anything that they can do except their time together? Faced with separation, they savour every remaining moment, hold it, cherish it, never letting it go. Their relationship has solidified over years and thats what keep them happy, loved and safe.

Yes, when it comes to the story line, there is nothing more than what I have mentioned above, but when you watch this 65 minute odd film, you are left in awe in the minimal dialogues, the silence, the beauty and the perfect image of summer, peaceful and tranquil. The film doesn’t overdo anything. Simple things like cuddling, intertwined feet playing with each other with their shoes on, falling asleep in each other’ arms, time spent with their family and moments of quiet contemplation as Jonas and Luke ponder what the future holds for them individually and collectively. Separately they contemplate the future and wonder about being left behind by the other, but together in the last lazy days of summer, they simply exist in the now and are content to do so. They being gay or being in a relationship is never an issue with anyone. This film is more about pure teenage love. Its weird that even though the guys never even kiss but the film still felt very romantic.

First love in a small town has never been shown so beautifully, romantically and simplistically. When you love someone, you just want to be with them and spend time with them. Everything else just waits. (7.5/10)
Posted by Golu at 2:48 PM 4 comments: