Where The Bears Are: Season 3 (Web Series)

And the bears are back ! By now, if you have seen the first two seasons, you have a general idea on the characters, their goofiness, their interactions and their silliness as well. So you know exactly what you expect and hence what you get is also what you expect. Its a win-win situation.

Like the predecessors, his season will also feature Reggie, Wood, Nelson and Todd into solving yet another thrilling murder mystery. Suddenly all chunky beefy male models of ‘Chunk Studio’ are being illdd and over a period of time there are 3 deaths. Nelson gets cast in a horror film, Chunk Studio owner wants Todd to join, which he ultimately joins as undercover. And Reggie enlists Wood to help him shoot a reality TV pilot to help him expand his brand as a true crime expert. We also have the usual dose of the 2 detectives also trying to solve the case. Thing sleep mystifying and eye are raised at all potential suspects including the make-up at its, ex-flames and anyone working in the Chunk Studio. Just when they the fours think that they have solved the murder mystery by catching the culprit, a rude shocks awaits them. Apparently it was not just one or two killers but its a team and now the bears must unite to solve this mystery for good.

The series was still fun and good time pass. Nelson’s hyper active praise of himself still gets to my nerves but its the combination of Wood and Todd that keeps it very interesting. Also the number of cute bears that you get to see in this series is just amazing. Since this is a web series, I can understand watching it like a movie feels dragged but its ok. I, for one, look for more seasons and stories coming out form this combination but as I mentioned earlier, the makers really need to keep the total length in check.

Definitely a laughter riot, but only if you have seen the previous seasons and you know exactly what you are getting. Otherwise you may end up with wtf reaction. (5.5/10)
Posted by Golu at 3:58 AM No comments:

Oh My God!! What a piece of garbage this was ! yes, you read it right. I have actually written those words right at the beginning to save many viewers who are still yet to watch it, save themselves over an hour of their life. Sure the film wants to make some point about depression and loneliness but then why drag it to 90  long boring obnoxious minutes. The message could have been so well passed on in a 10 minute short feature film.

I will struggle to write the plot here because there was none but let me try in a couple of sentences. We see Brian, a handsome young man, going though past and present of his life and living in depression and fear of something. We also meet Joe. an older fit and handsome man, who time and again comes in Brian’s life as a source of strength. The chapters of their life are then shown in repeat mode with pretty much every scene repeated like 5-7 times, which didn’t make any sense to me. The films starts with Brian’s death so we know what’s in store finally for us. And that’s pretty much it. I am not kidding. I feel bad for actors who must have thought of this as a great potential film for them but alas, only if wishes could come true. There is one nude scene that barely lasts for the viewers to look forward to anything.

This movie feels like 2 lost actors looking for a film script and a director. And why this particular title? Please please do not waste your time on this at all. Just when you think you have seen the worse of movies, something comes up again to surprise you. (0.5/10)
Posted by Golu at 4:26 AM No comments:

Can I be your bratwurst, please? (Germany/USA)
Jeff ‘bratwurst’ is tickling everybody’s fancy. When he arrives at a Hollywood hotel, all the guests have all sorts of fantasies set in motion at the sight of Jeff. We have a Marilyn Monroe look-a-like, a leather-man with a little white dog and the hotel-owner’s mother all craving for Jeff’s flesh. But fantasies turn wild at the dinner table set for christmas, where maybe these people are more than just humans and want even more than Jeff's bratwurst. Or is it just Jeff's imagination? A very well done and interesting piece of short narrative. (6/10)

The Disgustings (USA)
A comedic short film about a day in the life of two best friends, one an egocentric complainer and the other a judgmental ruthless witch, both ridiculous narcissists. This film clearly shows the abundance of assholes around you. I couldn’t believe some of the insulting to people remarks in this but I can also believe that people like these 2 exist. (6.5/10)

The Bash (USA)
This short film deals with internal and external homophobia. After movie screening, an argument breaks between the gay couple on why one can’t hold hand of the other. This gets unwanted attention of three rowdies who try to beat them but didn’t expect faggots to fight back. The couple’s relationship gets a new strength. (7/10) 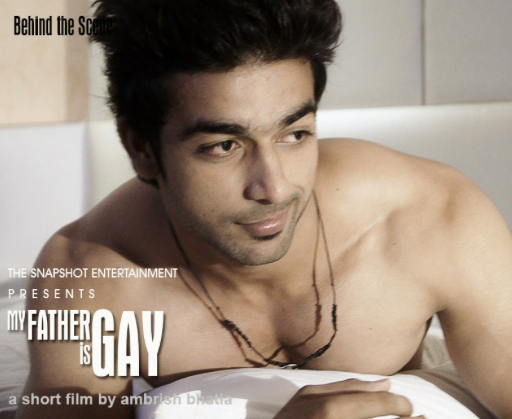 My Father is Gay (India)
This is a very embarrassing watch. A young guy lives with his father and he hustles to make money. His father never asks where he gets this luxury life style from. ONe day when the son realizes that his father is in some kind of financial trouble, he along with his friend discovers that his father has closet gay tendencies and during one suck encounter he met a guy, who is now blackmailing him. The son agrees to accept his father and help him and tells him the truth about him being a hustler too. It turns out that the guy's friend had it all planned so that his friend could leave hustling and could see what his father really is. A great plot idea which if handled nicely can do wonders but with horrible acting, worst direction and utmost disgusting diction of english words, it was painful and then comedy to sit through the film. On the plus side, the guys were really HOT. (1/10)

It's elementary - Talking about gay issues in school (USA - Documentary)
A first film of its kind to address anti-gay prejudice by providing adults with practical lessons on how to talk with kids about gay people. It shows that children are eager and able to wrestle with stereotypes and absorb new facts about what it means to be gay or lesbian. Since it aired on more than 100 public television stations in 1999, It’s Elementary has fueled a growing movement of educators and parents - gay and straight alike - who are committed to preventing pervasive homophobia and anti-gay violence. The film shows what happens when kids in kindergarten through eighth grade discuss lesbian- and gay-related topics in age-appropriate ways. Shot in six public and private schools, It’s Elementary models excellent teaching about family diversity, name-calling, stereotypes, community building and more. Definitely worth a watch for everyone. Its so refreshing to watch some kids being so pure and just talking about what comes as a first thing in their mind. Highly recommend. (7/10)

Ta av mig (Sweden) [Undress Me]
Mikaela recently changed sex from male to female. One night out she meets a guy who is more interested in her than her girlfriend but he keeps asking her about her dark husky voice. He follows her home, eager to know the reason. When told the truth, he is curious to see her breasts and vagina. There is a subtle power play between the two characters where we see how they are both a little intrigued by each other. The movie examines our perceptions of gender and how our identity can be formed by the perceptions of others. I liked it because it never gets ugly. It explores the curiosity of human nature. (6.5/10)

Sam (USA)
After being bullied and beaten for dressing like a boy at school, Sam escapes into the fields surrounding her house, where she’s forced to spend the night and choose between who she is and who the world expects her to be. It s avery short film with minimal dialogues but somehow it just failed to connect with me. I think a little more context would have helped the movie a bit. (3/10)

After The Sky Turned Black (USA)
After losing his vision in a terrorist bombing, photographer Frankie West closes off from the world, eventually forcing his frustrated boyfriend, Graham, to abandon him. Months later, a bitter and reclusive Frankie dedicates his time to seducing young men who sound exactly like his ex. They share an evening where Frankie recounts his past and wonders how things could have ben different. A very touching and emotional film though it ended too quick. This plot has a potential to be a full length feature. (6/10)
Posted by Golu at 5:25 AM No comments: