I think the director of this film has a knack for creating sexual tensions in his film. "Plan B" and "Absent" are bob exemplary examples in that area and now we can safely add the name of this film as well in the list. Not only does he create a good tension n the film, and the film moves slow but it still does manage to hold your attention quite a bit. I have a feeling that like his previous films, many may not like this slow style of narration but I again enjoyed quite a bit.

The bearded and bespectacled Eugenio, a scruffily handsome thirty-something from Argentina's well-off middle class, has moved into the house of his uncle so he can look after it for the summer and at the same time work on his novel in peace. When the younger Martin comes knocking on his door to ask him for some summer yard work, the duo realize they used to play together in childhood in the same neighborhood and Martin's hired straight away to do odd jobs around the house. What Martin doesn't tell Eugenio is that he's actually homeless and sleeping in the park, though by the time Eugenio finds out, the two have spent enough time together for Eugenio to suggest Martin sleep in the house's shed. The house-sitter might have an ulterior motive for keeping his worker close. Eugenio would like nothing more than being manhandled by the help. The next 90 odd minutes is a slo cat and mouse game where both the the guys are sorta attracted to each other and want things to happen but don't know how, when and where to start. Martin once takes a leap and kisses Eugenio but he acts surprised. When Eugenio realizes what he is missing, he goes back looking for Martin and the ending is really beautiful. The smile on both their faces just killed me.

People may think of this film as cock-tease but trust me there is so much more to it. The film maker explore ideas of the gay male gaze and desire as well as more complex issues of class. The film is full of erotically charged atmosphere, which never seems to translate into any action. You get excited because the actual doing of the deed would interrupt the joy and innocence of the games of almost-foreplay, which is so prolonged. Performances from both principal actors is quite good and they are both freakishly good lookin. Something very sexy and raw about both of them specially Eugenio. The sexually charged scenes where Eugenio is trying to peak into the bathroom when Martin is taking a shower or the one when Martin unzips his pants and takes off his shirt is HOT! to say the least. The guys were in just shorts for most of the movie and so was I while watching the film because it is summers where I am right now and trust me, the heat from the movie was no less evident. 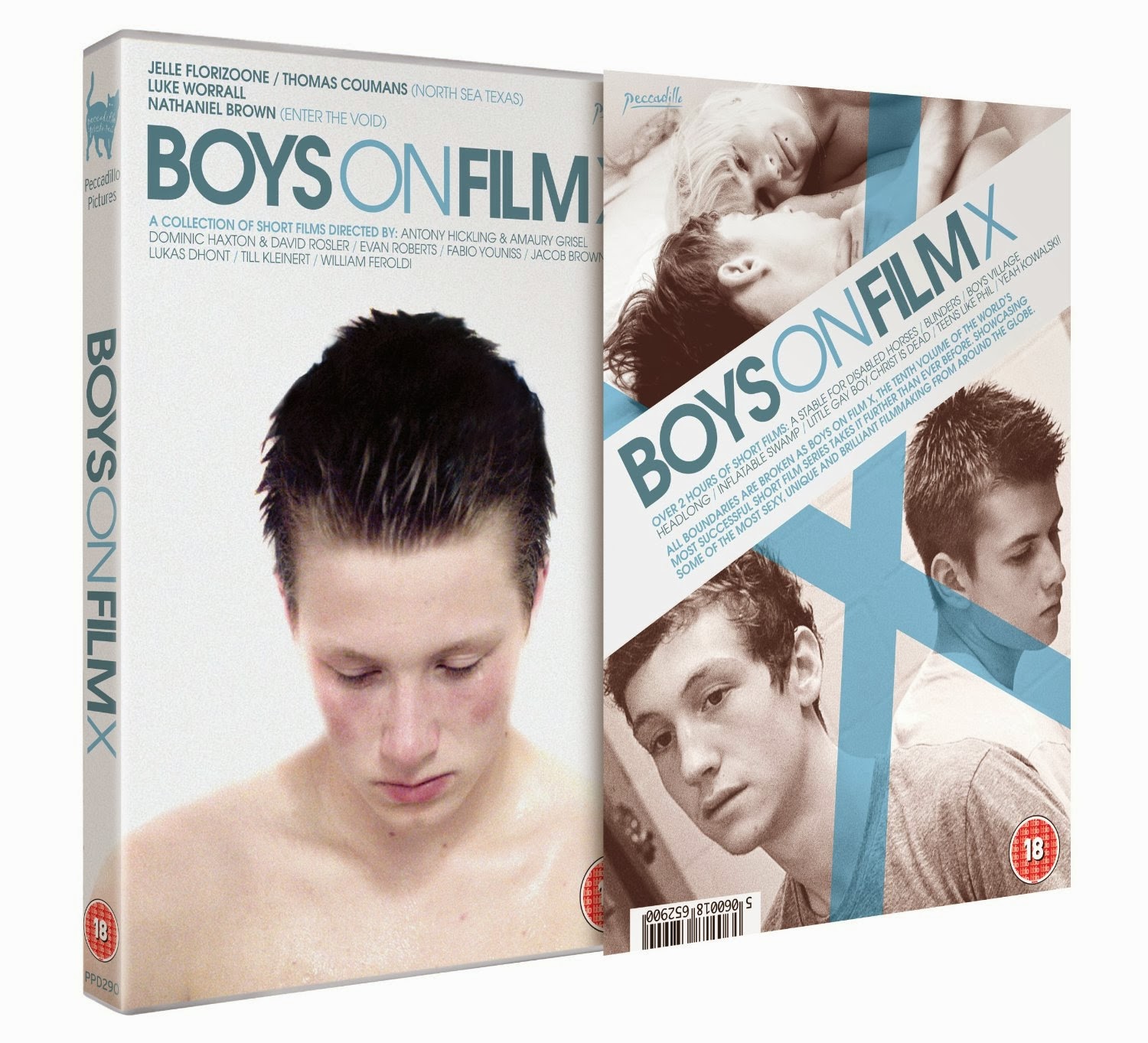 Boys On Film X is the tenth volume in the world's most successful short film series.
All boundaries are broken as BOYS ON FILM X takes it further than ever before, showcasing some of the most sexy, unique and brilliant filmmaking from around the world. Honestly I have been more than happy with this series but this series IMO has been a major disappointment.

Blinders
One night a young couple visit a bar where they meet a young boy. This boy possesses an otherworldly physical beauty that could attract anyone; man or woman. And indeed, the young lovers are attracted, one more so than the other. What does this chance meeting mean for their relationship? An odd film but thankfully was short enough to bear

A Stable For Disabled Horses (UK)
A totally inapt title for the short film. When Kanoute decides to move back to Norway his best friend Benny throws him a surprise party a party just for two. It soon becomes apparent that Benny has a secret that he has to get off his chest before Kanoute leaves, but is it a secret Kanoute wants to hear? Another one of those strictly ok and OTT acting

Little Gay Boy, Christ Is Dead (France)
Jean Christophe dreams of becoming an international model, but in reality lives with an old lady, an English prostitute in Paris. Over the course of one unusual day, JC endures a series of abusive encounters that will change him forever. His youthful innocence is changed to hardened experience as his dreams are destroyed by those around him. This was not an easy film to watch. The abuse he goes through just in the course of one day is too much to watch. PLus the dance act after every encounter does try to tell you something but I as a viewer was just not sure, what that is.

Boys Village (UK/Germany)
The Boys' Village was once a holiday home for coalminers' sons, where the young boys could just be themselves. Not much remains of its former glory, though. Shattered glass and debris are all over the place; graffiti on the walls. There are countless trap falls and opportunities for injury. Kevin finds the place very interesting and spends lot of time there. He has been 11 years old for quite some time now. Has it been years or decades? This film was unnecessarily stretched long. There was absolutely nothing worth watching.

Headlong (Belgium)
On the night of a dance competition a young ballet dancer is in a foreign place. He finds himself alone in his hotel room and when this emptiness overpowers him, he meets a stranger that could change everything. An interesting film, it wasn't clear why the young boy was sad and what was it about this stranger man with a shady background that got him attracted towards him. I am not too sure of this even qualifies as a gay short.

Teens Like Phil
This is one of the better films in the series. Phil, a shy, insecure teenager, is trapped in the painful throes of adolescence and the struggle in coming to terms with his sexuality. At his elite private school, Phil is bullied by Adam, his former friend and love interest. Adam frequently lashes out against Phil and enjoys humiliating him in the locker room. When Phil can no longer tolerate the situation he takes drastic action to bring it to an end. Better acting and overall a string message of teenage suicide is well depicted in the film.

Inflatable Swamp (UK)
Matt, a gay man in his late 20s, navigates the lonely intersection of carnal sex and human closeness. With the arrival of Luke, a new man in his life, he finds a way to reconcile pleasures of the flesh with the new aroused imperatives of the heart. Almost a silent short film, this was just the right length and something interesting to watch. An example of how gay men can be scared of true intimacy.

Yeah Kowalski
Definitely the best saved for the last. Gabe Kowalski is a late bloomer and all-around misfit whose dad still cuts his hair. When Gabe's anonymous question about his still smooth armpits is selected to be read aloud in sex-ed class, Gabe goes to great lengths to impress his classmate crush, Shane, at Penny Foster s birthday party. A teenage's obsession to reach puberty soon, this film is charming and pleasurable to watch with good acting.

This edition is definitely the most disappointing of all. (3/10)

The Falls: Testament of Love

A sequel to last year’s “The Falls,” this film actually jumps forward five years to reunite the two young Mormon men who came out by finding each other in the first film. I believe that  it is a solid continuation where they left off in the first movie because it was explained well what happened to the 2 main characters at the start of the movie. I didn't expect a sequel hen I saw the original film but I was quite glad to see the makers coming up with one.

Its been 5 years since RJ and Chris fell in love and separated. After their trip together, Chris suddenly disappears and stops replying to RJ's messages. RJ now ha s a new boyfriend Paul and hints seem to be going good. Meanwhile we see that Chris is now happily married to a woman and even has a 3 year old daughter. Destiny reunites them when they both hear of Rodney's death (the military veteran they befriended while they were on the mission). Chris totally snubs RJ and wants to have nothing to do with him. RJ doesn't know what to do because he is still struggling to find the closure on his relationship with Chris. RJ then decides to take a work break and goes to Salt Lake city to meet Chris. Initially he shows up unannounced at Chris' house but is warmly received by his wife. Chris snubs RJ as long as he can but soon he also gives up and now cannot control his emotions anymore for RJ. Chris' wife soon finds out and i not ready to give up yet. But Chris doesn't want to lie anymore. He decides to come clem to everyone that he cares about including his family. RJ finally finds a closure that he had been looking for 5 years but at the same time he also knows that he can't be with Chris (which I still don't quite understand why). THe film ends on a mic of happy-sad note.

Like its predecessor, once again, understatement is a strength here. No character or scene is over the top or dramatic but instead its very real. The only time I felt something was fake was when RJ decides to talk to Paul to take a break. THe whole reaction by Paul (sudden crying and weird expressions) were too annoying in a film where every other character is beautifully underplaying their part. Even the fight or conflict between Chris and his wife has been done really well and very underplayed. The film also never downplays on christian religious beliefs. The end when RJ kisses Chris at his parents anniversary was probably uncalled for. While talking of positives, the film is definitely very slow and sometimes sluggish in its pace. Both RJ and Chris are still very cute and adorable. The film does ask some serious questions about love vs personal responsibility and how our actions affect the ones we love.