Mostly shot by hand held camera (or at least that's what it seemed like), this film shows the story of 3 individuals who are coming to terms of their individual feels and what effect their feelings will have on the people around them. Did the film succeed in portraying what it set out to? Let's figure it out.

Jana is a lonely social worker. She is in a lackluster and boring relationship with David which has no spark left. David spends most of his time at work and avoids Jana. Whenever he meets her, there is no chemistry and together they are both aware of the drifting chemistry, both physically and emotionally. And then we have a young German Turk Nazim, who also tries hard to keep up the appearance of straightness. Night after night he goes out with his homies, dances with girls like Jana and deals with drugs on Hermann Square. It is first jana who ends up sleeping with him. In a different turn of events, Nazim and David end up sleeping together as well. When the three of them find out he truth about each other, this is when all 3 of them will have to re-evaluate their fascination, love and passion for love and for people around them.

The director focuses on certain things that are not considered as social norms. The fact that Jana hides her job from her parents, Nazim trying to act straight all the time, even bashing up some queers, to the ultimate failure attitude of David, who just flows from one person to another without any emotion. The acting by the actors is thankfully pretty decent specially by Nazim. The concept would have made an excellent short film of 15-20 minutes but the low production and the somewhat extended scenes etc just take away the essence of the film and the fact and the vision that the film maker had.

Into The Lion's Den 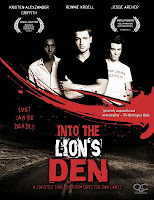 Started off well, this movie soon became one of those wannabe's bad bad thriller gay movies. The story is simple but then its the acting, execution and just about everything else which makes a huge huge difference.

Three friends are on a cross country road trip from LA to NYC. Johnny is the eldest of the group who does not miss any opportunity to hook up with a stranger on the road. Mikey owns the car and is dealing with a breakup. Apparently he just found out that he is positive too. The third friend is just coming out and wants to live life a little bit. When they are few hours away from the city, they decide to spend the night at a motel and Johnny drags all of them to a bar called 'Lion's Den' where he is meeting a trick from internet. Johnny gets into an argument with his friends who leave him and go back to the motel. It turns out the motel owner duo of husband-wife have some other plans. The husband likes men and the wife tortures the guys while the husband is having sex. AFter Johnny is tortured, he tries to run away but the wife kills him. They then call his other 2 friends and kills Mikey as well. The third friend is all who is left and he somehow manages to escape. Thats it!!

The so called 'thriller' scenes are so bad , childish and amateurish that I was giggling and laughing at those. I have nothing against independent and low budget cinema but common!! At least make those believable and not amateurish specially considering how much is available today in terms of technology, acting, directing etc. As if OTT Johnny wasn't enough, the husband-wife duo of Lion's den were horrible. Only saving grace was a restrained acting by Mikey. He has potential but he really needs a better director.

How I wish I could say that you should support independent cinema. Alas!! not this one. (4/10)
Posted by Golu at 3:28 PM No comments: 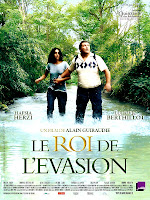 Was this film a spoof or a comedy or drama? It is so hard to say. A lot of viewers describe the movie as comedy but I saw WTF!! And where was the plot? A lot of scenes were just there for the heck of it. The story idea was good but it was so badly executed.

Armanda, is a 40-something gay man who is very popular in the social circle. He sells farm machinery in the countryside. Just when his life was going monotonous and nothing exciting was happening, he meets a 16 year old girl Curly and they both fall in love with each other. The expected restrain from the parents follow and Armanda woos the girl and they go on a run from the parents and the police. Somehow Armanda finds this magic root which can get him hard to be able to perform. Whenever him and Curly get a chance to make out and "do" something, they are always disturbed. Finally they get an opportunity and they make love but Armanda gets bored and now wants to leave Curly. In the meantime Armanda is being pursued by an older man, he wants to sleep with his boss and the head of cops is after him. Somehow the girl is found by police and Armanda goes for a run and meets the cop, the older man and the other guy all under the influence if this magic root and having sex. Armanda joins the group, has fun and the film ends.

Yes, the film just ends there. Totally random and weird. I still don't get it on what was the point behind all this. There is lot of nudity for Armanda which I must say as very bold of him to do considering he is over weight. Unfortunately, the characters were one dimensional, for which I felt no interest, empathy or affinity. There were a lot of sub plots and characters thrown in just for the sake of it. Maybe I am missing something but this film is not the kind of films that I would like to watch.

Somewhere I Have Never Traveled (Mandarin)

Somewhere I Have Never Travelled is a deceptive little film. As a slice of life in rural Taiwan it promises many things overly familiar to anyone who's seen more than a handful of films from the country over the past five years or so. It is wrong to classify this film under gay themed, since it is just that one of the 2 characters happens to be gay and is dealing with it. There is nothing much more than that to this.

Ah-Guei is a fifteen-year-old girl who comes from a family of misfits -- her father is intellectually challenged and cleans streets for a living, while her grandfather is a neighborhood character known for his short temper. While Ah-Guei seems like a happy and well-adjusted girl on the surface, she was born color-blind and cannot see red or green, a seemingly minor disability but one that sets her apart from her classmates. Ah-Guei's most trusted confidante is her twenty-year-old cousin Ah-Xian, who dreams of traveling the world and owns a large collection of maps and books on exotic locales. But Ah-Xian has his own secret -- he's gay, and has never been able to find another man with whom he can have a happy relationship. Ah-Guei and Ah-Xian both share a dream of going away to a place where they won't seem like outsiders, but while Ah-Xian's desire is to move to New York City, Ah-Guei imagines a fantasy world where the colors she cannot see do not exist.

The performances although decent, fail to lift the movie to a different height. There are moments in the film which are empty, pointless. They are visually enchanting but really do not add much to the film. I bet there ar abetter Taiwanese films. The movie’s more comedic sections are fun and, even if slightly contrived, work well in the film's context. I am not too sure what was the intention of the director behind this film.

Lack of any real reason to keep watching means it can't really be recommended. (4/10)

Sometimes when you experiment in the way a story is narrated, it backfires on you, because as a director you become very self-obsessed. Thankfully this film does not fall in this category. It still is surprising that not many people might be aware of this film. It is a shame because I have never seen this way of showing flashbacks sequences. It must have been a difficult screenplay to write IMO.

A prisoner Simon requests for a specific priest to make a confession. The preist is surprised but gives in and visits the prison not knowing what to expect. He is locked by the prison priest in the confession room and soon a play begins. Apparently Simon wants the priest to do a confession of his own. The play being played by the prisoners is real life story of Simon's young adulthood days. Simon used to attend all Catholic school and was in love with another boy Valier. Their love was pure and secret until one of their classmates (the now priest) finds out about them. He confronts them. Things become even more severe when Simon's father finds out about this and beats the hell out of Simon. Scared of anything further, Simon starts dating a visiting Parisian women (played by a man since the play is being staged). Valier is heart broken but finds his strength in his mother. On Simon's engagement day , he attends the party to declare his love for Simon. SImon finally realizes his true love and leaves to spend time with Valier. It seems like they will live together happy now but the third boy (the now priest) does something horrible for which Simon gets jail for life and this is what he wants the priest to confess about.

The whole idea of showing the flashback of someone's life in the form of play was very very interesting. I am glad that they let male characters play the female parts as well. At any point it did not look funny or weird. The whole play was interesting, though slow. Acting by all characters is excellent especially the 2 characters playing female roles. You would need patience to watch this film. Although the film focuses on revealing the mystery behind why the priest has been invited to the prison, it does leave a lot of questions unanswered. For instance, how could Simon convince all those other prisoners including the guards and the priest to be a part of this scheme. Agreed his story is poignant but to convince everyone of the truth is no mean feat, especially when it is about love between 2 men and not a man-woman. On a positive side, the relationship between the protagonists is one of committment, of trust, of pain and caring, of going through the good and the bad together.

Strongly recommended. It is an excellent example of merging 'theatrics' into a movie setting. (6.5/10)
Posted by Golu at 2:40 PM No comments: