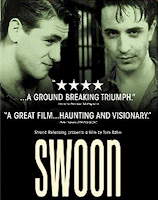 I have a lot of movies to catch up on. I am not too happy that after such a long gap, this is the film that I saw. Although quite a few people might disagree with my review of this film, specially people who are actually familiar with the case, I will still say that the film was draggy and a little too stoic. I cant find the right word to describe what was it that I was missing in the film.

Based on true story in 1920's the film follows life of Nathan and Richard (Dick) known to people as Leopold and Loeb. Their relationship has been going on strong for a long time now. They seem to be bored with life. Out of this arises the lust for kidnapping a young boy in the name of ransom. This act goes horribly wrong when they end up killing the boy and the police finds a trail of them. The film follows how they get captured and ultimately what happens to them in prison and after. The men's demeanor throughout the interrogation and trial suggests a complete lack of, not only remorse, but also comprehension that they have taken a human life. The duo bicker about the details of the crime as though they were trying to recall what they ate for breakfast. The men are distanced not only from the crime, but also from any semblance of humanity.

Swoon focuses more on homosexuality of the two killers rather than the crime and its implications. Had this film been made more as a mystery, it would have been much more interesting to watch. The directing style is very slow and odd (personally for me). It almost celebrates the two killers, while the innocent young victim is reduced to a nearly anonymous figure. Although the main 2 characters were definitely very good looking.

This was a very very odd film. Set in 1950's, The film just goes through the life of a young teenage boy names Bud. He lives with his extended family in UK who run some o kind of restaurant etc. He is all alone and the movie just depicts his loneliness.

Bud is a lonely and quiet child whose moments of solace occur when he sits in rapture at the local cinema, watching towering and iconic figures on the movie screen. The movies give Bud the strength to get through another day as he deals with his oppressive school environment and his burgeoning homosexuality. His world is influenced by his mother, sister and brother. The film just walks us through glimpses of his childhood (which could be autobiographical).

These kind of movies most of the times dont make sense to me. I think this is director's over indulgence with himself that draws him to make these kind of movies. I mean the movie just goes nowhere. It is a series of mood scenes, perhaps remarkable as such, but I want more from a film. I look for story and movement and a fulfillment of arrival, none of which did I find in this film.

This was a very confusing film. I am not too sure what was the whole intent behind the film. The main character Johnny is an Irish immigrant who now lives in NY. The film goes through his life and tribulations that he goes through in NYC.

Johnny works in the construction business for an Uncle who tends to be the catalyst for a majority of the problems. Johnnie has slight sexuality issues which, in drunken states, he sometimes has delved into being with men as well as women. He has a girlfriend who sometimes takes care of her. He has constant nightmares that reveal something happened when he was a child but they're never quite clear enough to the audience or to Johnny for him to understand them. When the guys in construction dont get any money , they ask Johnny to go after his uncle but even he spends money on weird things. Christian, a young hustler, comes along and shows Johnnie some much needed compassion and care and teaches him what love is about. Johnny is getting deep into drugs, alcohol and struggle to find himself. Johnny eventually realizes what all those bad dreams are about, even though we don't. We don't because, like much of this film, the scene in which Johnny's nightmare is revealed is confusing and extremely vague, leaving the viewer to figure out most of the implications on their own.

This film was a llittle odd in the sense that lot of things in the film were left unexplained. Story just moved without having a clear motivation as to where it should be heading. The main actors were strictly ok. And the title has to do with construction work which totally doesn't make any sense.