This is a short and sweet film which has a great potential of being made into a feature length film. Ben is smitten by college jock Johnny. During one of the rehearsals, Ben offers to help Johnny to remember his lines. The rehearsal takes place poolside at Johnny's home - with refreshments courtesy of abandoned champagne from a recent party of his parents'. As they drink, run lines and chat their relationship develops and they share one secret with each other. Ben never having kissed anyone and Johnny never having been blown. Ben dares him and blows him but suddenly the other friends come. Johnny freaks out and gets out of the pool but in the end just gives a smile to Ben (indicating he loved what just happened) and thats it.

Simple short stuff with good looking boys can definitely do wonders for this one. Acting was good and even though it was a short film, there was no compromise on the quality of the product. (7.5/10)
Posted by Golu at 3:37 PM 4 comments: 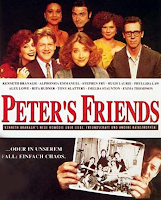 I think I have mentioned before a few times in my blog about the kind of movies I prefer. I definitely like movies where there is a group of people and they show how there life is screwed up and how everyone has some or the other issues. It would be wrong to classify this film as gay film because apart from the fact hat Peter is hinted to be bisexual, there is nothing else in the movie that shows or depicts that it is for just gay audience.

Six friends in an acting troupe graduate from Cambridge University in 1982 and go their separate ways. Ten years later, Peter inherits a large estate from his father, and invites the rest of the gang to spend New Year's holiday with him. Roger and Mary are now married. Mary is always stressed about their son because they already have lost another child. She i always in panic mode. They fight but towards the end they make up in a good way after Roger explains why it is necessary to let their son grow normally. There Is Sarah with her current boyfriend. She is sex maniac who likes it till the moment the guy commits and she freaks out. The date she brings with her suddenly tells his wife about the affair and leaves her. This freaks Sarah out and eventually the date goes back to his wife. Maggie is lonely single woman who thinks she might have a chance with Peter but Peter tells her that he has not been sexually active for a while and may be he is gay or bisexual. And then there in Andrew who is now married to a famous TV star who is all about keeping fit, not eating and making it big in movies. She also laves half way in her vacation because she gets a movie offer. On New Years eve Peter tells his friends that he is HIV positive and thats why he wanted this meeting. All friends sing and dance and celebrate the new year just being amongst themselves.

There is nothing special about the movie but still when you watch the film, you feel excited and happy to se the bonds of friendship and the chemistry and how people change at a certain level over the years but sometimes friendships never change. Acting was decent by one and all. It take some time to get a hang of all the characters but after that its all good.

J'ai rêvé sous l'eau (French) [I Dreamt Under The Water]

Antonin is a young man who hangs out wit his friends. He is in love with Alex who is deep in drugs but never had the courage to tell him. He lives with his divorced mom who is unhappy with her life. One day because of drug abuse, Alex dies. This leave Antonin devastated. In pursuit to search for himself he turns into being a hustler and making money for himself. During one such encounters, he becomes friends with a guy who is going through his breakup. but during the course he meets a girl Juliette and he falls in love with her. He stops hustling but keeps visiting his friend whom he met. The film goes through various twists involving these three individuals. And if you are wondering WHy I dont know what happens, it is because I could not handle the movie anymore. It was soo boring.

The only good thing about he film was how good looking Alex and Antonin were. Th sexual scenes were filmed very realistic which can sometimes be a turn off. Aside from the over-stylization, the film is flawed by a seriously unsatisfactory conclusion.

Now this one truly for me was a different film. A different set of characters, different chemistry among them and focussing on a completely new story. It was nice to watch it. Not that it is a path breaking cinema or anything but I like fact that the director tried to do something new. At least from my perspective.

Zobel and Karl are a long time gay coouple with their daughter Lizzie. The form a trio of pick pocketers who steal from rich to live. As the despondent Karl grows more insecure, dissatisfied and absent-minded, the possibility of a new partner is bandied about by father and daughter. An unfortunate accident of Karl leaves no choice for the other two but put their faith on a young man named Rudolf who once tried to steal from them. Rudolf is also a very sexy, shambling young upstart who is only too willing to gratify the father/daughter team in whatever ways it takes to become part of the scheme team. Rudolf has affair with Lizzie and at the same time he is also sexual with Zobel. When the truth is out Lizzie walks away and Rudolf follows him. They try to lead a simple life working but thats not good for them. Meanwhile Zobel is living under guilt of sleeping with the man whom his daughter liked. Lizzie and Rudolf come back and talk about forming a team with the condition that money will be split equally. Clearly tables have turned now and Zobel is no longer the boss. Ultimately they continue their life robbing. The movie ends with Rudolf walking with Lizzie while his other hand playing with Zobel's hand.

The film is simple, funny and warm. The story line is sweet and the ending is darling. The acting by all lead characters is decent. It is not a sleaze film. There is actually an intelligent plot abetted by four supremely professional actors who make it all worthwhile.

This film looks like it has been made by a relative new director. The story was very basic and paper thin but the treatment was very fresh and real. There were lot of time where one way or the other I was able to relate to the film and the characters.

Trevor is entangled in a very unhealthy relationship with Darrell who s a drug addict. He is also in a telemarketing job which he hates. When Darrell is caught doing drugs no sooner than he came out of rehab, Trevor decides he cant take it any more. He meets a charming doctor Ephram and begins dating him. They have a very sweet and cute relationship going on. Trevor shares an apartment with Andie, a morose alcoholic who passes out during a party and awakes to discover she had sex with a stranger she can’t remember. They also have a best friend Jake who is practically living with them and is very harsh and speaks his mind. They make a good trio. All three of them go for HIV test and it turns out Andie is positive. She doesn't tell anyone until one night when she lashes out on Trevor for always complaining about his problems and not listening to others. Trevor and Ephram try and work through their relationship. Ephram gets a job in NY and wants Trevor to move with him but Andie and Jake try to reason with him that he has a life in LA and that he cant just go and move. Trevor is bummed and heartbroken but he finally takes the decision to stay back in LA and says to Trevor that if they are meant to be together, then they will.

My favorite is Jake. His one liner insults are great. He represents a typical NY chelsea 20 something boy. Talks and scenes between Ephram and Trevor are also very real and they bring a smile on my face. Overall the film is ok but its the chemistry between the 2 characters and their reaction on the way while their relationship is growing made me like the film even more. 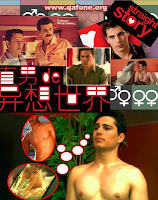 I can't remember but I am pretty sure I watched a film with a similar theme earlier. This one although was funnier and sassier than the ones I have seen before. Forget the acting aspect but overall it was a good fun experience. The film is set in a modern world where being gay is the norm and straight people are in minority and are considered perverts.

Yiannis is a straight man in a gay world, who secretly goes to straight clubs. He has loving dads and he is afraid to come out to them and tell them he is straight. He loves Sophia at his work but is too afraid to say her because she is already in relationship with another girl. Secretly Yiannis hangs out with his straight friends and goto clubs. One of the night, SOphia and Yiannis get both drunk and end up sleeping with each other. Yiannis likes her but now she is confused because she totally loves her partner but she also can't resist the temptation of being with a man. Meanwhile one of Yiannis's dad has had an affair with a very yound man who is now in love with him and is threatening to ruin the perfect happy family. He to an extent succeeds but the dad begs forgiveness from his spouse. The other dad passes out when the secret of Yiannis being straight is revealed and that is wen film has a fantastic end. It is revealed that he was watching a dream. But now he gets a perspective to accept his own son being gay and loving.

The acting by al characters was really good. Oh! and one thing I couldn't help but noticing was that Yiannis ass was soooo good. lol. A lot of stuff was over the top but hey I am not complaining. It made me laugh by taking me to an escapist cinema and once in a while it is good to watch such stuff.