A film which could have been a decent, in fact good gay film eventually turned out to be an overdramatic coming of age, mother dealing with son's homosexuality. There were a lot of unanswered questions and sudden twists in the plot which were undesired.

8 year old Paul Portfield, an aspiring piano player and soon to be Juliard student, gets a job as a page turner for his idol Richard Kennington, a renowned concert pianist. During the concert, you get the beginning glimpses of the sexual sparks between them. After few months, when Paul finds out that his dad has left his mom Pamela for another woman, they decide to go for a trip to Spain. While wandering the streets Paul spots a concert poster featuring Richard and he sets out to find him. Paul tracks him down and drops by his hotel room where he's soon seduced by the pianist in an intimate and gentle way. Paul becomes totally infatuated with Richard but Richard goes back to NY to be with his manager and boyfriend Mansourian. Months go by and Paul is now attending Juliard, seeing an older man, and trying to get over Richard. Incidentally one day he meets Mansourian in the same building as his old lover. Mansourian tries to come on to him and invites him over to a party and seduces him. Meanwhile Pamela finds out porn magazine and Richard's pictures in Paul's suitcase and goes crazy. He rushes to NY to confront Richard but he has no idea of whats going on. Finally mom son meet and talk and everything is clarified. It is shown that both Richard and Paul loved and longed for each other but nether knew the entire truth. Paul had no idea that Mansourian was Richard's lover and that Paul and Mansourian had sex. Life moves on.

The first half of the movie was good. Beautiful Barcelona, good looking men and a spark and chemistry between the pair but things fall after the mm finds out. Actually even before that. It is never shown why Paul was dating an older man whom clearly he didn't like. Then why does he sleep with Mansourian? Just hoping to get his big break in piano world. At least thats the impression I got. Paul's character wasn't justified. Pamela was very OTT. She needs to learn how to control her acting. Rest was fine.

It s a very good first half but a not good second half but still watchable. Of course I realized that it was my second time. (5.5/10)
Posted by Golu at 10:33 AM 2 comments:

Race You To The Bottom

This was one confused film just like the characters in the film. On second thoughts actually, it was not that bad. I just wish the director was a little more clear in what exactly did he want to portray. I mean we have earlier seen bisexual characters confused about their sexuality but then ultimately they reach a end point but here I dont think there was a proper end.

Nathan and Maggie are having a torrid, sexual affair. The difference is that Nathan is bisexual and Maggie is straight. Kissing their respective boyfriends good-bye, the two recent college graduates embark on a wine-tour through the beautiful vineyards of the Napa Valley. As Nathan continues to pick up hunky men during their trip and multiple glasses of wine are consumed, the young lovers begin to confront the consequences of their actions and wonder if they are truly in love with each other or the seductive thrill of an illicit affair. Nathan likes Maggie but is not in love with her as he is clearly confused about what exactly he wants. Plus he is not openly out about him being gay to his family or friends. On the other hand, this trip makes Maggie realize that she is in love with Nathan and wants the same in return but Nathan does not. The friendship takes a sour turn when they both come back home, tell their respective boyfriends of the affair and of course they leave. A couple of years later, a chance meeting happens again while hiking and they discuss about their new love lives with their respective boyfriends and just decide to race to the bottom of the mountain.

Nathan was again effective after Harry And Max but it seemed like an extension of his previous role. Plus with his looks etc, its kinda difficult for him to actually pull off being a straight man. Maggie acted well powerfully portraying the dilemmas of a hag who falls in love for her fag. 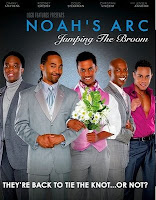 Charming, lovable and completely predictable, thats the way you can describe the film. SOmetimes you know very well whats gonna happen but still the way certain films are presented makes the wol difference to the cinema. This film can be counted as one of those films.

Noah is marrying his lover Wade, whom he nursed when he was sick.To send them off, his buddies are throwing Noah a wonderful party at Wade's family vacation home on the gorgeous island of Martha's Vineyard. Deliciously femme Alex is whipping up a frenzy in the kitchen thanks to some mysterious pills. He has taken the charge of the whole wedding and wants everything perfect. His boyfriend is at home minding their child and house. Slutty Ricky (who we very soon find out deeply loves Noah) brings the cutest button of a date Brandon, who he abandons immediately in favor of a stranger in the shrubbery. Brandon is incidentally a student of Professor Chance. Chance and his husband of few years Eddie are trying to work out the whole LTR/monogomy issue, with little success. When there are so many people there is bound to be drama. Ricky is trying to sleep with every man just to ignore the fact that he can never have Noah , his best friend as his lover. Brandon has crush on his professor that creates friction between Eddie and CHance. And among all this Noah and Wade have to deal with their own insecurities and issues. Finally all's well and they get married and funniest is when unknowingly Noah outs Wade to his mom.

Various reasons for me to like this film. It all my favorite characters. Black gay men. Specially Alex, he was so funny. Also the fact that the film was not supposed to be preachy. Take everything with a grain of salt and watch the proceedings. The issues that probably every gay man deals in his life. Noah and Ricky were CUTE. And everyone's acting was also upto the mark.

Wow!! Now thats what I call a fantastic film. There was not a single second where I was bored in the film. Considering the fact that it was completely non-streotypical gay film, it was a big risk, but man, this is funny as hell.

Ecky has always been football lover. He is the goalkeeper of his team and proud of his parents in a small town. When he is not paying ,he works with his father in the bakery. When his team-members find out that he is gay they throw him out of the team and made fun of. In a fit of anger, he challenges the team for a match 4 weeks later with gay team. He then moves to the Dortmund with his sister Sussane (who is supportive of him) and subsequently tries to form a full fledged gay football team.His journey through tough-guy town Dortmund is really, really funny! The group includes a trio of leather-clad bikers, a very feminine Turkish deli worker, an extremely masculine lesbian, a closet construction worker and a couple of Brazilian players. It also includes a nurse Sven, who ultimately falls for Ecky. There is also this straight guy who joins the team just so that he can be closer to Ecky's sister Susanne. With certain ups and downs they start practicing, losing hope and self confidence in between to finally coming back together with the help of coach. Finally the match happens. Ecky's parents finally give up and support their son. An exciting match happens which ultimately leads to the winning of gay team.

The film is so funny. I had a brilliant time. Form the very queeny Turk guy whose parents support him every time to the humor that comes with the biker trio and their stereotypical gay life style to the lesbian, everyone is in form. Sven's and Ecky's love story is minimal but effective. It also shows some emotions when one of the biker trip is shown to have a history and a son who after the match is proud of his dad.