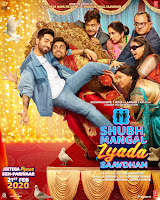 Finally, a hindi film that doesn't stereotype gay men and doesn't make a caricature out of them. A film that deals with homosexuality as much with homophobia keeping it all very commercial and easy to understand. India has produced a few gay themed films but more often than not they have either been preachy and outright bad. This film keeps things in humour and make a novice finally understand that love is love and your sexuality is what you are born with without being preachy about the whole thing.

Kartik and Aman Tripathi are a loving couple. Its Aman's cousin's wedding and the 2 men decide to join the celebrations. All hell breaks loose when Aman's father sees the 2 men kissing. Kartik reminds Aman that since his father is a scientist he will understand the relationship but that never happens. Aman's parents and his his extended family are furious. They force him and pressure him to marrying a neighborhood girl, despite knowing very well that Aman may be gay. This is where the struggles begin. For Kartik, its about educating Aman's parents that homosexuality is not a disease and he is ready to take on any fight that comes his way for the sake of his love. And Aman finally gives into the parental pressure just so that Kartik doesn't get beaten up. The girl who is selected for Aman is ready to go marriage of convenience because she loves someone else, but thats unacceptable to Aman or Kartik. Finally, as you would expect in a bollywood film, eventually the parents come around and even give the two men their blessings.

The story above may seem really simple, but I cannot tell you how funny the film was!! And the humor was not at the expense of homophobic jokes. Thank God! It was the entire wacked up family that made this film a treat to watch. The constant bickering of Amman's parents, his uncle and aunt being reminded of their status and education and Aman's cousin who is desperate to get married. These are the characters who give this film its soul. Of course the shy and coy Aman and more flamboyant Kartik's chemistry is amazing (given they are both straight men). There are multiple scenes where homosexuality is explained either through humour or through drama but it never gets overboard. Few dialogues remain with you. Instance when Kartik tell's Aman's father that gay people have to fight for their rights everyday but its the fight with their family which is the hardest. Or when Aman explains his sexuality to his parents and asks them how come their love is love and his love is illness. There are a few scenes where you cannot help but crack up. When the two boys kiss again at the cousin's wedding and the entire family comes up with a theory so far fetched, that you cannot help control your laughter. Each and every single character in the film is just perfect. There is a lot of fun which I am not sure, to be honest, if that will be relatable to people outside India, but I had a blast watching the film. It made me laugh, it made my eyes get moist and it made me think how much India has progressed in the kind of things we show in our cinema. You could never have expected a mainstream hero do a film playing a gay character and never in your dreams you could imagine two men kissing on the screen. I really hope people of India give this film and make this film a success because its time India start accepting gay relationships and be proud of who we are!

Watch this film, especially if you are Indian. It educates you that homosexuality is no disease or sin. Its no different from any other love. And be ready to be a roller coaster ride but the Tripathi family will take you on a joy ride like nothing ever before. Fantastic and looking forward to more Indian films with strong content like this. (8/10)
Posted by Golu at 4:48 PM