I have no idea how did I end up getting my hands on this show. Funny! Brilliant! and superb witty dialogues are some of the things that come to my mind after watching the show. Just 6 episodes, each of 25 minutes each, you see same faces, familiar situations and dialogues and they just make you break into laughter.

The premise is quite simple. Freddie and Stuart are an old gay couple who have been together for nearly 50 years. Their lives now revolve around entertaining their frequent guests and hurling insults at each other at every opportunity. Ash is a young handsome man who is their new neighbor. Their long term single friend Violet who is looking out for a man in her life. And then an old lady, who just keeps forgetting everything every minute and finally another guy who no one just cares about.

I can imagine that not everyone would like the show. You have to have an appetite for dark sometimes even morbid humour and be a fan of sarcasm. The dialogues and the sarcasm that is in Freddie's character is simply outstanding. And every time Stuart's mother calls him, that is superb too. My favorite is every time Stuart introduces Ash to Violet. Thats hilarious. Stereotypical characters in a brand new light. Excellent casting, perfectly matched the roles and the actors. The witty and snappy comments compliment the new character types not too often seen on TV. Original script with lines you can use in an everyday life. Agreed that the show is hammy and over the top but I think that's what I liked about it most. It's ridiculous and I think the ridiculousness is what makes it so brilliant.

I think the job is successfully done when a viewer doesn't mind watching something again and I would definitely not mind watching this show again with friends. It was simply funny. (8/10)

Update Jan'14: Just saw the Christmas special episode. I think my expectations were way too high, so I was a little disappointed but it was still very very good. Violet definitely is my fav character in this show.
Posted by Golu at 4:40 PM 2 comments:

This is a very interesting short film. It can be rightly put in the category of teenage coming-out stories. Justin is a 17 year old teenager who gets a summer job at a health club. He notices he is getting attracted to some hot men in the club but keeps denying it. One budding swimmer in the club helps him get over his anxiety and help him realize who he really is and be ok with it. It is a good film that shows the struggles that most teenagers have coming out and how maybe some of us help them get over their anxiety. Acting by both the principal characters is actually very good and real and I must say that they are both very good looking and easy on the eyes. Justin specially looks good and does his job very well. A duration of about 25 plus minutes keeps this film at the right length where as a viewer I get enough of context to not imagine things on my own and at the same time, it doesn't feel too dragged. (7/10) 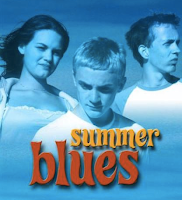 Summer Blues (Norway)
This was a very interesting short film. Mads and his girlfriend are fighting over some issues. Enter Kristian, Mads best friend who is back for summer break. The 3 of them with another girl go to a summer home for the weekend to a nearby lake. Mads is getting way too drunk to handle his girlfriend's situation. Rumour from his friends is that she might not be entirely faithful to Mads. Kristian sees this as an opportunity to explore his feelings for Mads while he is sleeping. Not only he explore his bare chest with his lips , he even goes south. The shock comes in the morning when Mads tells him that he was indeed awake and also Mads works out his issues with his girlfriend. It is too embarrassing an awkward for the 2 friends to be together now. That still doesn't stop Mads from giving him a goodbye peck on his cheek. (6/10)

Platero (Argentina)
Its summer time and a family of four is entertaining their kids friends for the day. Walter and Analia are siblings and its their friends visiting. Walter has hots for Analia's brother, whose nickname is Platero because of his dick size. The film just focuses on sexual tension when everyone is dealing with extreme heat, swimming in pool and eating. The friends engage in all sorts of conversations. Walter watches his sister giving bj to Platero which excites him. When she has to leave midway, he tries to take a chance with Platero but gets snubbed. The sexual tension was so real, that I could completely feel what must have been going inside me. Very very good but it can test your patience. (7/10)

Weak Species
Its almost a 30 minute movie. The film explores George and Steve. Both are high school students. For student, it gives him a sense of power to seduce his fellow classmates, have sex and then reject them.When Steve sets his sights on the school star athlete, he starts a cat and mouse chase which could ruin him and his idol. Rejected by Steve, George finds himself in dangerous situations where he goes on dangerous sex encounters beyond usual S&M, which could be critical to his life. When the star football athlete dies in an accent, his mates bash up Steve and around the same time George barely manages to save his life. The 2 unlikeliest of guys get together and hope to find love in each other. Some of the scenes are very disturbing and graphic to watch in the film. This film is definitely for the weak heart but is definitey an interetsing concept. Both the lead actors act really really well. (6/10) 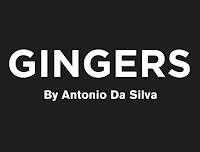 Gingers (UK/Portugal)
Gingers. Redheads. Fire crotches... It is an incredibly sexy, erotic and beautiful short film in which a group of redheaded, mainly European men are interviewed in their glorious nakedness. They talk about their bodies in really what is very intimate detail - their fur, their hair, their cocks, their skin - as well as what it feels like to be fetishised for being a redheaded gay man. Each body part is lovingly lingered upon by the camera - faces, chests, pubic hair and cocks including an amazing sequence of each of their cocks growing from soft to hard in speeded-up time. Really, it is just a hymn of praise to the stark and outstanding beauty of redheaded men. It was a very interesting and sexy short. (6.5/10)

Even now, while writing this review, I really can't make up my mind if I liked this movie or not. Hopefully by the time I finish writing this, I would have a clue. The story is not very novel. We have seen the premise before but this one like every film has something different to offer. The one definite good thing about this film ws that it is set in New York and being away from my city for about 2.5 months now, kit definitely made me nostalgic about the city.

Jack is a Brit gay man living in NYC. When his brother unexpectedly dies in a car accident, he starts taking care of his wife who is pregnant. Years have passed and his niece is now 6-7 years old but Jack's life still surrounds his sister-in-law and niece. He works with a photographer with his lesbian best friend Aly. When Jack finds out that his visa renewal application has been rejected, his lawyer suggests that getting married is the only option left with him. He coerces his friend Aly to marry him. Things are going ok until Mano comes in Jack's life. Mano, of Spanish origin is the perfect guy that Jack has been waiting for. The perfect marriage has now has a twist even though Jack and Ali were never in love. Mano and Jack start staying together and Mano soon becomes part of the family. Aly is always scared that immigration would catch her and put her in jail whereas Jack is not as serious. When an unexpected visit from INS happens. it freaks Aly out completely and she wants out of the marriage. Jack gives in but is depressed and now very unsure of what his future will be. Mano offers to marry him but lawyer tells them that gay marriage is not recognized at federal level so there is no point. In the meantime Mano finds out that his father is critically ill and now he would like to move back to Spain. He offers Jack to move with him but Jack doesn't want to leave his niece and refuses. When his sister-in-law puts some sense in his mind, he finally understands that its time he start thinking about himself. He decides to take the plunge and move to Spain to be with the love of his life and with a promise that his niece will visit him every few months.

The film slightly touches upon the DOMA issue but very little. It plays with emotions on very different subjects as there are several unexpected twists and turns throughout. The over-all premise is a sophisticated urbane justification for gay marriage, but it is presented as a family of friends drama with quite legitimate and compelling emotional drive. The film also brings up a few 'what would you do in that situation?' subjects, which promotes conversation with friends and family. In terms of acting Jack did an alright job. He was acting but somehow the emotional connect to his character was missing. I could hardly empathize with his character. Specially when subject is like this, you want audience to connect. Another big failure was Mano. The way his character was shown was a little shady in my opinion. There were times in the film when I got the impression that Mano was a fraud kinda person who was playing with Jack's emotions. Also the way he would look at Aly and give her the look while they were married was odd. Anyway, I might be going into too much details but thats what my observation is. Th little girl in the film was the best part.

All in all, this is still a pretty decent movie and worth a try. For an independent film, it will still satisfy you. (6/10)
Posted by Golu at 4:27 PM 1 comment: