Elliot Loves is two stories in one:  present day twenty-one year old Elliot, and young eleven year old Elliot.  It is also a comedy with a few heartfelt moments of drama. The movie keeps going from present to past when Elliot tries to see how his present life compares to what he was going through as a child.
Elliot, is someone who we call a serial dater. He falls in love with any man on the first date himself and starts dreaming of his wonderful life ahead. His latest adventure introduces him to Joe who is hot, attentive, pays for food and doesn't mind Elliot's non stop diarrhea of the mouth. But the next morning he fins that Joe is in an open relationship with his boyfriend. The movie then goes to his childhood days. Eliot lives with his single mother and her boyfriend, who does no work. Elliot and he do not like each other but hey tolerate each  other for sake of Elliot's mom. Elliot and his mom share a very very close bond. Though only a child, Young Elliot is forced to act the adult. The eventual tension of the situation comes to a head, and words a parent should never say to their child are said. Because of this, Elliot still has self-esteem issues in his adulthood days and all he does is keep looking for love in all wrong places. He eventually does find love in Joe, who ultimately breaks up with his boyfriend.

The introduction scenes for both Young and Present Day Elliot are hilarious, and effectively show you everything you need to know about the character at that stage of their life–you are given a solid baseline from which each character develops. The mother's character is also funny and sketched pretty well. Though you can’t forgive her neglect of Elliot and the poor choices she makes, you do understand where she is coming from. Elliot's acting is good. He is required to be over the top, but it thankfully doesn't become annoying. The film also surprisingly had some really good animation sequences. It does give yoga good inside into the queer Latino culture as well.

Overall the film takes you on a ride that will make you laugh and make your heart-break. (4.5/10)
Posted by Golu at 6:02 PM No comments: 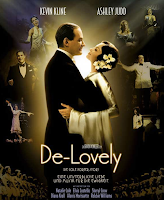 Having recently watched Amadeus, I was quite keen to see another autobiographical movie on the American composer Cole Porter. I had neither heard the name before nor did I know anything about his music but still I was looking forward to it. I must say that I wasn't disappointed. Embellished with great performances and quite high production values, the musical with a unique narration style, did keep my interest alive in the proceedings and overall the experience was very satisfactory.

When Cole Porter is about to die, his life flashes before him in a form of musical. It goes back to the time when he meets Linda, a beautiful attractive woman, whom he ends up marrying later. Linda is aware of Cole being gay and interest din men but her love and devotion is very strong and she choses to overlook that and even is ok with is flings outside marriage. She is the woman behind his success , who constantly reminds Cole how talented he is and even arranges for meetings with various bigwigs in NY and Hollywood who then contribute for Cole's success. But after a while, Linda os tired of her husband's constant philandering and their relationship goes strained. When COle is photographed in an embrace with another man in a rest room in a gay night club, both the estranged husband and wife are separately blackmailed. Cole is ok with it and still doesn't get his act together prompting Linda to leave him and go to Paris. When Cole is severely injured in a horseback riding accident, she comes back to take care of him, ignoring the fact that she herself if suffering from TB. Waiting for her impending death, she attempts to forge a relationship between him and her interior decorator so he'll have a companion following her death, which deeply affects him. The eventual amputation of his right leg adds to his deep depression, affecting his creative output.

Performances by both Cole and Linda is outstanding in my opinion. They both bring the charm, sensitivity, love and grace that their character demands. The musical number are kinda funny and are done really well. I am not much of  musical person when it comes to movies, but i did not mind this one. The film could have been trim me at various places. I liked the side story of COle's friend and his family and how that indirectly keeps Linda and Cole together. The movie, a valentine to an older way of life and of music, has a modern candor about homosexuality. Too bad it did not have more man to man scenes or occasions except most of them were more left to the viewers imagination.

The film is overall mostly delightful. (6/10) 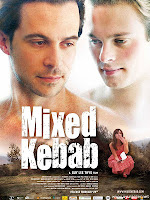 I watched a gay film after a really really long time. And I am glad that it wasn't a bad one. I was hesitant on which movie to pick up, since there was long break but thankfully, this film almost met my expectations. I guess the trick is not to have huge expectations in the first place. The film with hits Turkish background became even more appealing to me for reasons known to people who know me. The film deals with social and religious equality for gays, religious fundamentalism and about divided identities.

Film's protagonist is Ibrahim, a Turkish origin guy in Belgium who would rather be called as Bram and identified as Belgian. He is Muslim and is gay. With this the platform is set. He is smitten by Kevin, the son of a woman running a local diner. They become friends but soon we also find out that Bram is all set to marry his cousin back in Turkey. Bram's family is traditional Turkish family. His younger brother Furkan is an angry teenager, who skips school, commits robberies and roams around aimless. His father is always shameful of his acts. When Bram gets to go to Turkey to confirm his wedding plans to his uncle and his cousin, he decides to take Kevin along with him asa friend. Till this point the two guys are nothing more than friends. Their mutual admiration and closeness doesn't go unnoticed by the hotel porter who snaps a couple of pictures of the 2 men together in compromising position. It is during their stay in Turkey that finally the 2 men become physically closer as well and finally realize that they both love each other. It turns out that this porter has been folioing around with Bram's supposed to be wife. When this porter shows those pictures to Bram's fiancé, she cries but ignores because she is hell bent on moving to Europe to get alive for herself but in the process she makes sure to get a lot of money spent from Bram to keep her mouth shut about the whole gay thing on Bram. The boys come back and it seems life will be back to normal but someone from Turkey send those pictures to Bram's family who are shocked by the entire episode. His father shuns him and tells him that he is hence dead for him. Bram takes up job with Kevin's mother in their diner but misses his family. Furkan's bad ways catch up to him when an old enemy attacks him and stabs him. This is when Kevin and Bram help him and take him to the hospital. Initially awkward, Brams' parents accept him but remain cold to Kevin. The film ends with Kevin leaving the hospital and Bram walking away with his family.

In my opinion the end of the film has been left for the viewer's own interpretation on whether Kevin breaks up with Bram or not. I myself can interpret both ways and thats why I think it was the right way to end this film. Clearly Bram loves his family and they also love him but the whole gay thing is too much for them. It is now unto Bram on how he manages to balance his boyfriend Kevin with his parents. The film thankfully is not just about homosexuality. It is also about lost identities, racism for immigrants, how people long for something that they don't have. The film was interesting by surprisingly very high standard of acting by everyone involved. The film had some light moments as well which kept the overall tone of the film decent and not too heavy. Ibrahim/Bram acted really well although somehow I was not able to connect with his conflict. Kevin acted really nice and so did Bram's father. The scene where no one talks to him in the turkish cafe was very poignant.

Overall a very decent watchable film in the sleuth of crappy gay films that are served these days. (6.5/10)
Posted by Golu at 11:44 AM 2 comments: